Open Letter to the Guy with the Chain on his Pants

I couldn’t help but notice that clunky length of hardware you have bouncing off your hip connecting your trousers to your pocket hole. I have to ask, is that chain an ill-advised fashion statement? A half-ass security measure? Is it part of some advanced underwear security system? Is it a wedgie-blocker?? Some type of jock lock-up? Well, don’t flatter yourself my friend. And for the record, I only ask to be educated.

In all fairness, I know nothing about you link-slingers on an intimate level. You might all be absolutely awesome people but then again it’s just as likely that you’re all total tool bags. It’s just the law of averages, nothing personal. All the more reason, though to speculate as to the purpose of your linkage. And so in my quest for knowledge I find myself wondering if you somehow thought stringing a lamp chain around yourself like garland on a Christmas tree would make you look rougher and tougher than nature intended. Is that it? Is it? Is the terrier tether part of some muscle-headed, jizz-fueled muscular makeover? Of course. That’s it. Because there’s nothing like chains strong enough to restrain a diarrheic Labradoodle to really ramp up the cut of a marshmallow physique. Face it, Brutus. That chain is about as manly an accessory as a furry pink coin purse made from a flamingo’s ball bag. And I say this as someone that considers sleeves a luxury item. In my world, hats and underwear are interchangeable garments. And even so, I wouldn’t sport a chain. But if it’s style you want, I say go full bore and match up some elephant chain suspenders with a few iron ingots for your teeth and a solid steel neck medallion the size of a hubcap. Tell your chiropractor I said hello. Hell, you can dip your testes in molten metal while scratching your ‘roids with a crowbar for all I care. The important thing is that you’re happy… and stylish.

I realize that a lot of you leash junkies live in rural areas which leads me to wonder why anybody living outside of a bustling city would be so concerned with crime that they felt compelled to chain up their velcro wallet as if it were their seatless unicycle parked outside the mini-mart/gun club. After all, it doesn’t seem likely that Bambi’s descendents are going to run out of the woods with AKs wearing antler hoods just to grab your cobwebbed ass-purse and run with it into the headlights of an oncoming truck. It doesn’t add up. The padlocked pocket theory simply doesn’t work. Even in the unlikely event that your wallet DID get grabbed by some greasy gonad gunning for your unused library card, the chain is probably gonna rip right off of your pants anyway as the dude waves good-bye like an Olympian unsprung. Think about it. The chain is anchored to a belt loop made of mystery material that was sewed on by tiny brown, underage fingers in a country where human dignity has the believability rating of the Great fucking Pumpkin. Even those fancy pleather belts you Wal-Martians wear would probably bust right through those flimsy loops once you’ve parked your tookus at the Chinese buffet for a few hours inhaling deep-fried missing pets. What kind of security is that? I suggest slipping the chain into your drawers and wrapping it around a deeply rooted appendage. Maybe, an attempted robbery can turn into a cheap thrill for somebody.

Of course, I also know that wallets could easily slip through a frazzled denim hole and disappear into the Phantom Zone forever. These things do happen and I’m sure the astronomical cost of needle and thread coupled with the need of a sewing degree makes this obstacle practically insurmountable. Just a crazy idea I’m throwing out here but maybe your pants need to be retired once they develop aftermarket windows in the pockets. Again, this is a view from the cheap seats. I’m just trying to understand your wisdom.

Now, I would never assume that you were all ex-cons but if I did I would probably apply the theory that you all learned in the hoosegow, never to bend over. Capital idea. So, maybe the wallet chain was invented by the same guy that created Soap-On-A-Rope to keep straight men vertical. Brilliant, but wouldn’t a bungee cord work better? At least, it would spring the wallet back up to pocket level. By the way, what is your Lowe’s value per foot, anyway? Four packs of cigs?

Now before you go getting your jingles in a jangle, you must realize that these questions come from a place of curiosity and concern. It’s just that I see nothing hip or happening about cutting a couple feet out of your dog’s leash and draping it at your side like holiday lights across your patio in the middle of summer. It’s just that it looks like something you could get from the clearance table in the S & M shop at the mall. Meanwhile, the poor dog is left wondering why he can’t reach the garbage pail from the porch anymore.

Observations of the Unemployed 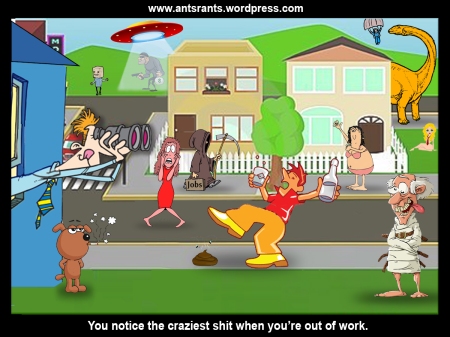 10. Employers don’t seem impressed with the Linkedin profile pic of me laying on the sofa in my underwear scratching myself with a turkey leg.

9. Meow Mix doesn’t leave my breath as fishy as other leading brands.

8. Those chicks on Springer really need testing. I mean scholastic… bacterial, whatever.

5. My proposal to become the inaugural Wal-Mart sniper tasked with cleaning up the customer base has apparently been rejected.

4. There’s a bar downtown that’ll serve me in my bathrobe and slippers.

3. The woman next door must be expecting a large package because the mailman seems to stay there for at least a half-hour or so each day delivering it.

2. At least 60% of the dog’s ball-washing is purely recreational.

1. Apparently, HandJobs.com is NOT an employment website despite the hours I’ve devoted to it.

I think there should be a special line at the supermarket for problematic customers. Anybody who remembers the Puppy Chow only after unloading their cart onto the conveyer, clearly doesn’t belong in the same line as me. The road to the register is a sacred place, man. It’s the light at the end of the tunnel. It’s the transitional point between pushing around a heavy shopping cart full of beer and going home and drinking a… shopping cart full of beer. Point is, if you have to run back to Aisle 3 for anything once you’re in line, whether it be Kool-Aid or extra-small condoms, you’re a prime candidate for lock-up in Retail Jail. Follow decorum or spend the afternoon locked inside the frozen fuckin’ broccoli closet with all the fruit-fondlers and turkey bowlers. And anybody who knows that their check won’t clear… or for that matter, anyone still writing checks 2000 plus years after the death of Christ needs to be excommunicated to the flunky lane along with all those suckers still buying video tapes and flash cubes for their fucking camera.

Meanwhile, I can assure Lady Alpo in front of me that the cashier does not need to waste valuable time discussing a customer’s avoidance of bran products. Unless your therapist is moonlighting at the local friggin’ Food-Hut, there is no reason to converse in depth with the grocery clerk. These people are there to wave noodle bags over the scanner and slide Cheez Whiz down to the bagger. For many, this is more than enough of a challenge. Cashiers are far too busy for asinine drivel and don’t get paid enough to multitask. Let’s let them focus on the task at hand so we can all move on to a more pleasant activity far the fuck away from the barcode jungle.

Oh, and let it be known to baggers everywhere that plastic is always fine. Don’t bother me with choices, they’ll only confuse me. This is the 21st century, though. We’ve killed enough fucking trees it’s a miracle we can still find a shady spot to loaf in while pretending to be at work. Paper bags are no more relevant than burlap friggin’ sacks. This ain’t Little House On The Fuckin’ Prairie over here. I’m not visiting a feed store where my purchase will be delivered via shovel. I won’t be carrying grain by the pound or a rack full of animal pelts any time soon, and I certainly don’t have a donkey tied to a post in the parking lot. Plastic should suit the bagging needs of anyone living in this century, which is pretty much everyone that I know. Bottom line: Paper bags are an impractical product of a bygone era. They don’t have handles, they don’t scoop shit well, and they’re far too difficult to suffocate in. And, of course, I realize plastic bags are effectively made from Iraqi blood but I refuse to politicize an issue of personal convenience.

Finally, cashiers need to stop telling me to press the green button as if I’m still in my third year of kindergarten. I slid the card, I can follow the prompts. I’m not a kid punching his busy box waiting for something to happen and I’m not crackin’ a fuckin’ safe here. And if I want cash back… I’ll just take it!