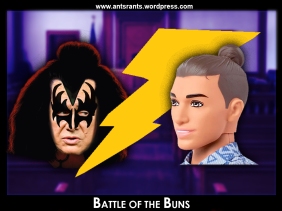 Rock relic, Gene Simmons is suing the latest incarnation of boy toy, Ken, for essentially stealing attention away from him. Ken Mattel is most famous for being Barbie’s long-time sperm donor. The Revlon-faced rocker is accusing Ken of capitalizing on the publicity garnered by his donning of the man bun hairstyle.

Ken’s hairdo is just one of several changes recently made to his famous form. The once buff and blue-eyed adonis now boasts a beer belly, loose bowels and a hell of a drinking problem. Most noticeable though, of course, is his man bun. In essence, Ken has a strange fibrous bundle parked atop his noggin for no real purpose other than to make people gawk and point. Not only is the hair style a major stylistic change for this heralded slice of Americana but a sure sign that human beings are slowly morphing in to a single gender with mixed genitalia. Accuser, Simmons has applied for a trademark on the very same hairball that continues to get stapled to his thick head before performances. The demon of dip-shits has also filed a suit against Ken himself for allowing people with no apparent purpose in life to gawk and point at his choice in hairstyles. The God of Thunder & Ego states “Hey, if you want to be the man, you have to pay the man. I created the man-bun when I was a kid. It was the only way to keep my hair dry when washing my Mom’s makeup off my face. I was the first one. The ancient Japanese Samurai got half their look from me. They’ll be named in a separate suit, by the way.” Hairstorians note that the phrase itself, “man bun” didn’t exist at the time of Simmons’ career. Instead, fans and detractors alike just assumed a wayward Tribble had escaped from the set of Star Trek and was nesting on high.

Upon hearing of the court filings, Ken Mattel replied “Fuck him. His action figure sucked and I have the video to prove it. That’s right. Gene’s just mad because I never age and he looks like shit. What is that pizza dough hanging off his face? He must be buying his wigs off the rack these days, too. Oh, and that tongue ain’t all that, either, I can tell you that.” Ken purports that Simmons has had a personal vendetta against him for decades. “Look, Gene fancies himself a ladies man. He’s always wanted to nail Barbie but she wouldn’t have it. Not once. She’s a classy chick, only digs cut plastic like mine. Not that weird kabuki shit. Man, that guy probably has more plastic on him than me and Barbie put together.”

Celebrity follicle expert, Harry Knowital doesn’t think the filings will even make it to court “Look, I get it. There’s a similarity if you compare silhouettes. Ultimately though, Gene wore a stubby little faux ponytail to cover his burgeoning bald spot like how a normal guy would just wear a hat. It’s been a clip-on since day one. Ken’s new hair is more complex. There’s twists, turns and possibly more than one rubber band. We’re still studying it but it we know it has a unique structure. Since it’s not the same thing, I’d say the only man bun Gene can lay claim to is Paul Stanley’s. There’s just no case. Never was. But we said his name, so he won and that’s that.” Ken reacted boldly to further questions about the lawsuit “Look, do I get paid for this interview or what? Barbie kicked me out of the Dreamhouse and nobody will even talk to me with this ridiculous wad on my head. This sucks. I can’t believe I actually miss her shapeless, monochromatic body. Oh, and I heard Gene has a stubby little fake one.”

This entry was posted on Friday, June 30th, 2017 at 9:59 pm and is filed under Uncategorized. You can follow any responses to this entry through the RSS 2.0 feed. You can leave a response, or trackback from your own site.