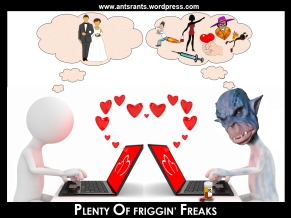 They say the best things in life are free. Perhaps, but very few would say that’s the case when it comes to online dating sites. In no other corner of the universe will you find such a concentrated pool of failed abortions as you’ll find on websites such as OkStupid and Plenty of Flesh. Of course, that isn’t to say that everyone that’s dipped their toe in those murky waters would make a great psychological case study. It’s just that quality isn’t the norm. There’s surely dozens of non issue-laden people that were simply misguided or ill-advised about joining the ranks of the disappointed. But, the fact remains that it’s the unadulterated insaniacs that make the most lasting impression. Sure, we’ve all heard the stories about dates looking like bloated, ill and antiquated versions of their profile picture. But, the right person could totally rock the decrepit look. What about the wrong kind of weird, though? Drama that borders performance art. Bodily noise orchestrations. Mental midgetry. Hygiene not witnessed since the Pre-Ivory Age. Not your thing, you say? Perhaps, the simplest safeguard against these encounters is to examine the potential dates’ screen name for Freudian slips. The truths revealed might not be pleasant ones but they can certainly wave a few flags so long as you’re open to seeing them. A recent survey reveals the most transparent and all-around worst screen names found on free dating sites. The survey was taken as part of the Equal America program at the Institute of Middle Class White Men. The data was collected among a broad ranging group of middle class white men.

This entry was posted on Saturday, July 8th, 2017 at 3:49 pm and is filed under Uncategorized. You can follow any responses to this entry through the RSS 2.0 feed. You can leave a response, or trackback from your own site.